Salmon spawn through external fertilisation, when eggs and sperm are shed simultaneously into a depression on the redd, and gamete fusion takes places. In nature, genetic studies of Atlantic salmon have shown that a single female’s nest is typically fathered by 8 different males, and up to 16, so the natural mating pattern is multiple-male spawning. (The same is not true for trout, where half the nests are sired by just one male.) There may be important processes within such competitive spawnings that maintain good genes and offspring fitness within the population. 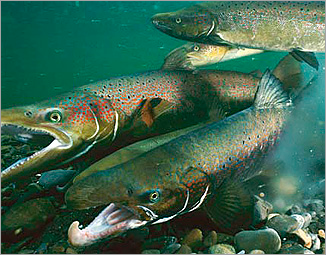 As soon as salmon sperm and eggs hit water, the resulting drop in extra-cellular ion concentration causes potassium to leach out of the sperm cells by osmosis, and calcium from the ova, changing membrane polarity and switching on the gametes. Sperm swim vigorously, at first in tight ellipses (see 1 second salmon sperm tracks in water A), but when they ‘smell’ ovarian fluid surrounding the egg and micropyle, the flagellum changes its pattern and propels the cell straight forward (B), allowing chemoattraction to the fertilization site. Following activation, sperm become motile in in seconds, and fertilization takes place in 5-10 seconds. Salmon sperm start to lose motility after 20 seconds, and most are dead within 60 seconds. Eggs remain fertilizable for a bit longer, 2-3 minutes. The whole process therefore occurs rapidly, and care must be taken not to contaminate or ‘preactivate’ sperm or ova before the addition of river water when needed. Incidentally, successful fertilization can be seen in a subset of eggs) after ~10 days, but only if the eggs are placed in vinegar to clear the membrane (which kills them) and visualise the embryonic streak. 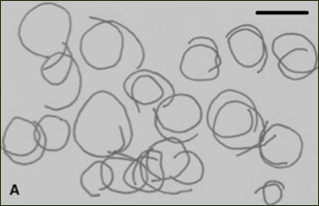 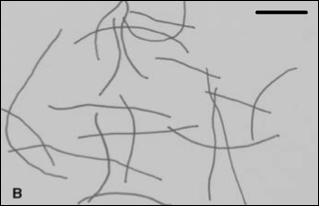 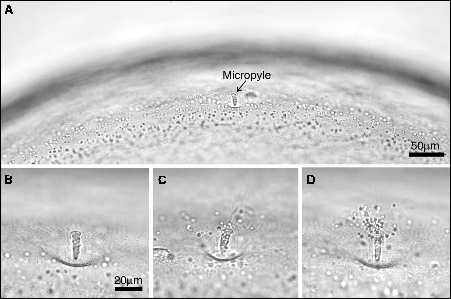 In artificial hatcheries, the choice of males to be used in fertilisations can have important consequences for population gene flow. This may be important if the river has a small effective population size, and risks of inbreeding exist which can depress population fitness. Under such circumstances, it may be necessary to preserve genetic diversity in the system by ensuring that ALL available males gain some paternity through the stripping process. If multiple males are used within each egg batch, then there is a risk that a particularly fertile and competitive male (smaller males who have to sneak for fertilisations in natural spawnings have very motile and competitive sperm) gains most of the paternity, thereby skewing paternity away from other males in the population, and losing some genetic diversity. Under those circumstances, it may be preferable to split egg batches from females, and fertilise each batch with milt from separate males, effectively ‘driving’ equal shares of paternity into the next generation.

On the other hand, following this non-competitive-male route presents the risk that a ‘duff’ male will cause the loss of valuable eggs through infertility, which is why hatcheries usually add the milt from two or three males to each egg batch.

Since the Dunbeath shows no sign of low effective population size or inbreeding, and probably receives added genetic mixing through straying from neighbouring rivers up the east coast, the use of two or three males per egg batch would appear to be a good compromise between assuring fertility versus losing some male genetic contribution through paternity skews. Moreover, the use of sperm from multiple males reflects what happens in nature.

In addition to supplementation, and insurance against breeding disasters, the Dunbeath Hatchery (in common with many river management plans in Scotland) aims to increase the relative number of multi-sea-winter spring fish running the river. If such fish are taken for broodstock, it may be prudent to match females with phenotypically similar males, in the hope of concentrating ‘springer’ genes in the offspring. Ideally, two or three such males will be available for stripping but, if not, it may be prudent to add the milt of the chosen male first, then the milt of the ‘back-up’ males ~3 seconds later through the fertilization process. This way, if the selected male is of normal fertility, he will fertilise most of the ova, but if he has fertility problems, the eggs are not wasted and the second male will gain the fertilisations.

It is standard practice to fertilise fish eggs in hatcheries using the so-called ‘dry’ technique. Here, eggs are stripped into water-free bowls, milt then added and mixed, then water added to activate the process. This process, if performed expertly, generally achieves very high fertility levels (~100%). However, it is possible (though not yet proven), that bypassing integral processes in natural fertilisations (such as the contact with water before contact between gametes) could create problems. As part of the Dunbeath Hatchery’s role in promoting salmon research, we aim to test (in collaboration with UEA), whether ‘dry’ fertilization techniques can create problems for resulting embryos and offspring development. 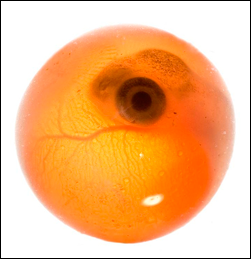 Modern biotechnology allows the application of DNA-based methods to improve our understanding of salmon rivers and hatchery operations. In addition, given the environmental changes that can impact on salmon populations, including farm escapes, a ‘genebank’ is a responsible thing to create so that, in future, historic genetic structures can be compared.

Each year, a small fin clip is taken from all broodstock contributing to that year’s hatchery production. The broodstock are sampled from the wild spawning population, so represent the genebank. Tissue is stored in ethanol, and the size of the adult is recorded, and any peculiarities (such as farm escape suspicion) noted. The Dunbeath Water genebank can therefore be used in the future to screen for changes in genetic structure of the population through time, and bottlenecking / invasion events. There are also now diagnostic SNPs for farm fish genotypes, which could be applied to any salmon genebank.

In the future, when we expect possible returns from the hatchery into the river as spawning adults, we aim to screen returning adults caught in the river and check if they match against any historical broodstock parental DNA. The use of a large bank of polymorphic microsatellite markers will allow high exclusion criteria, so that individuals can be matched against the historic broodstock. If we have a good idea of the relative number of adults in the population, these results can be used to assess the contribution of the hatchery to the spawning population (and hence its effectiveness). If, for example, we know that there are 200 spawning adults in the natural population, and 20 were used in the hatchery that year, then if 10 of the 100 returning fish to the river in a future year were hatchery origin, the hatchery is performing as well as fish spawning wild in the Dunbeath Water.

We are well aware of the emotions that salmon hatcheries engender but felt that due to the parlous state of the salmon stock in our river by the early 2000's that a short term small scale hatchery was in order. We commenced it in 2008 in a very small way in the basement of the old but recently rebuilt and refurbished cornmill by the Telford “old” road bridge over the river in the village. It benefited from direct river water supply and return via the old mill lade.

We now collect, strip, fertilise from our own river stock of hen and cock fish and return them to the river – the eggs are set on trays until they hatch and the fry taken on until the Spring of the following year before being taken to the river and released in small batches throughout the whole river system.

Under the guidance of Professor Matthew Gage (UAE) we are engaged in various genetic experiments to establish the DNA of our progeny as well as using the hatchery for educational visits and talks to local schools.